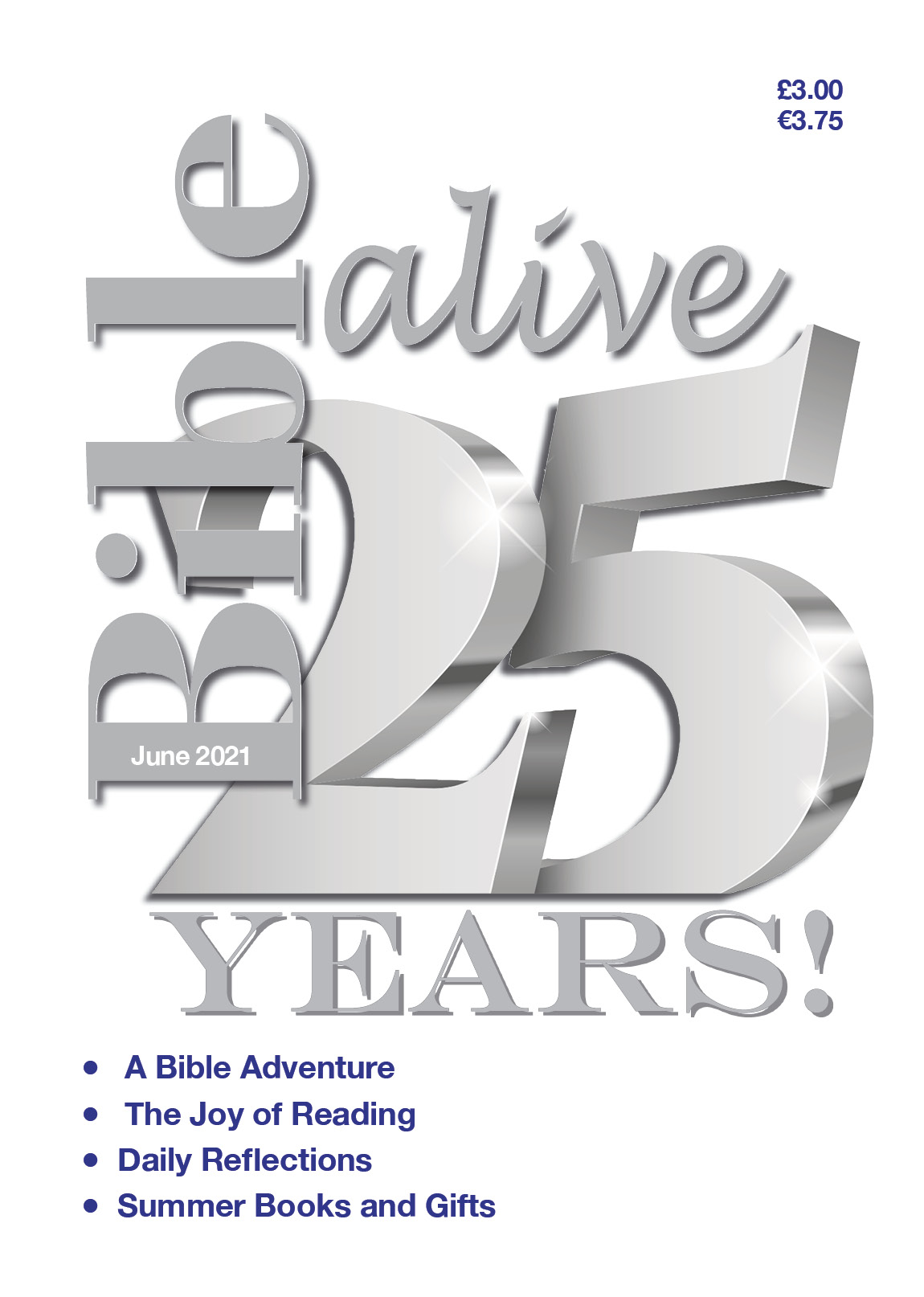 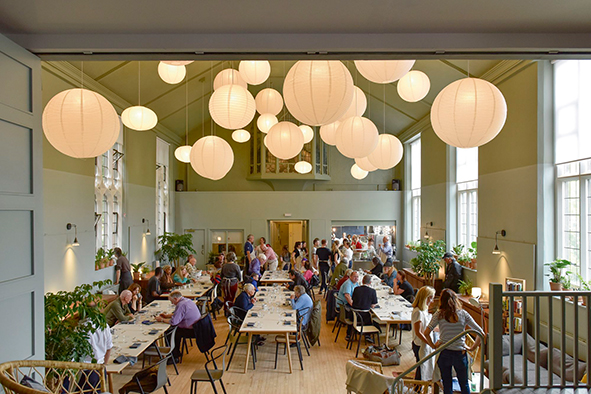 Top chef Massimo Bottura runs one of the best restaurants in the world in Italy – but it’s his London eaterie that’s really revolutionary says Joanna Moorhead, who makes a lunchtime visit.

It’s 1pm and I’m sitting in an airy restaurant in west London tucking into meltingly tender lamb with herb-doused potatoes and salsa verde. My starter, sweet potato and ginger soup, was similarly mouth-wateringly good; and if I’ve room for pudding I’m tempted by the lemon curd ice cream with polenta cake, crumble and blueberries.

Delicious food is a given at this restaurant: but surprisingly, it’s not the most interesting thing about it. Because everything on the menu, today and everyday, is made of food that would otherwise have been consigned to a waste tip. And what’s more, my fellow diners, enjoying at-table service from waiting staff for a meal you’d expect to pay at least £30 a head for on the high street, consist of people who are homeless, have mental health issues, or are vulnerable in some other way.

So Refettorio Felix is an eatery with a difference: and it’s got Pope Francis to thank for it. Chef Massimo Bottura, who runs the three-Michelin-starred Osteria Francescana in Modena, Italy, has said the pontiff was the inspiration behind it. ‘He knows the value of everyone sitting down and eating together,’ Bottura once said.

Bottura, whose day-job restaurant offers one of the finest eating experiences in the world, always knew that providing food only for the wealthiest people in society wasn’t enough. In 2015, he had the idea of opening a social justice restaurant at the Milan Expo. His plan was for a pop-up sited in the city’s railway station; but word about the project reached the Vatican, and the pope not only lent his blessing, seeing the project as something after his own heart, but also suggested Bottura should get in touch with the parish priest in nearby Greco, Don Giuliano. Next door to his church was a disused theatre/church hall, and the church made it available to Bottura – with Don Giuliano as one of his staunchest supporters.

When Expo 15 ended, the restaurant carried on serving meals – and Bottura realised his project, now backed by the Catholic charity Caritas, could expand to other cities. His not-for-profit organisation, Food for Soul, went on to open similar restaurants in Paris and Rio de Janeiro, with another planned for Sydney later this year. Refettorio Felix in London, meanwhile, opened its doors in 2017. Today it’s open five days a week for lunch, with plans to expand for supper as well; and, as staff member Natasha Bunzl tells me, the concept is about a lot more than food (delicious though it is). ‘The idea is that welcoming people to a lovely space, caring about them and treating them with kindness and respect can change lives,’ she says. ‘So we have created a beautiful space, and we invite our guests to sit down at the table and be served their meals, and to chat to the other diners and to basically enjoy their lunch.’ And all this, using food that would otherwise be in the bin.

The philosophy of the project is so simple, it’s difficult to imagine it’s not happening in every town and city across the world. Because as a planet we waste around 1.3 billion tons of food every year, in a world in which one in nine people go hungry every day. If we consumed all that we produce, and threw nothing away, we’d feed the world one and a half times over: and Food for Soul’s restaurants take those facts,and make them work in a more caring, sharing way. Each weekday morning at around 7am a truck arrives at Refettorio Felix laden with food donated by supermarkets and other retailers; there’s nothing wrong with it, but it’s usually close to its sell-by date, or it’s misshapen fruit and vegetables, or it’s simply surplus to requirements because the shop has over-ordered.

There are two chefs at Refettorio Felix – sometimes they’re working alongside a Michelin-starred chef, as the project has lots of top-end culinary support – and their day begins with a survey of what’s on the van. ‘Sometimes it’s a strange selection,’ says Natasha. ‘You might have lots of herbs and mange-tout; other days, there are loads of berries.’ This, then, is the moment for the chefs to employ their crucial secret ingredient: their imaginative nous about how to use what’s there to create a nutritionally-balanced, superlative meal. ‘There are always three courses on offer,’ explains Natasha. ‘Starters are salad or soup, the main course always includes a vegetarian option, and there’s always a dessert.’

Food is at the centre of Refettorio Felix, but it’s not the only thing on the menu. ‘We have a programme of art classes, IT workshops, alternative complementary therapies, counselling and yoga classes,’ says Natasha. ‘We’re trying to meet the needs of the people who use the centre in the round.’ The centre, at St Cuthbert’s Anglican Church in Kensington, also has showers and laundry facilities, and diners have access to a nurse.

Bottura, 56, grew up in Modena, and had initial ambitions to become a footballer, although his family wanted him to study law. But his mother backed his plans to follow his heart: and when he heard that a roadside trattoria on the outskirts of town was up for sale for a song, he bought it -and turned it into his first successful restaurant.

His ideas about food come, of course, from his homeland: he was inspired by the meals he enjoyed around his family table, and by the cared-for way food is produced in Italy. His flagship restaurant, Osteria Francescana, is the kind of place for which foodies cross the world to pay £350 for dinner with wine: his most famous dishes include one called ‘The Five Ages of Parmesan’ (five cheese of different vintages, cooked in different ways) and ‘Oops, I Dropped the Lemon Tart’, inspired by a sous-chef’s disaster with a plated pudding. It features a splash of yellow and a broken biscuit, and would not look out of place on the walls of Tate Modern.

While the osteria caters for the top-end diner, the refettorios are aimed at those with far less in life: but the uniting instinct Bottura brings is the knowledge about how powerful food can be, and what it can represent. And whether they’re customers paying eye-watering amounts for a world-class meal, or homeless people paying nothing, the message is the same: food is interesting, and fun, and about a great deal more than filling stomachs, important though that also is.

There’s a kind of joie de vivre at Refettorio Felix, as well as that baseline of common sense. Bottura didn’t want to open a soup kitchen, and he hasn’t: this place is infused with equality, and also with soul. It’s the sort of place where people who are up against it can enjoy, at least for a couple of hours in their day, the pleasure of a good meal in an attractive space, surrounded by caring and friendly people. And the real beauty of it, as Bottura has said, is this: that the restaurant manages to make something valuable out of something that might be seen as not having any value at all.