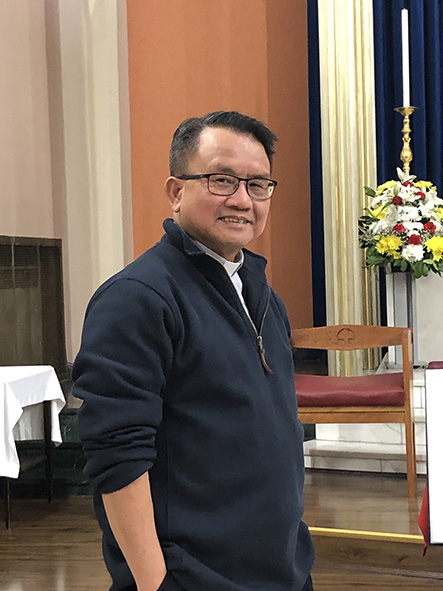 The deaths of 39 Vietnamese migrants, whose bodies were found in a lorry in Essex, speaks to the huge injustices in our world. Joanna Moorhead meets a priest who is doing what he can to help the families mourn – and to prevent others from dying in the future.

When 39 bodies were discovered in a refrigerated trailer in Grays, Essex, in October last year, Catholic priest Fr Simon Thang Duc Nguyen – like everyone else – was shocked and horrified.

The bodies, police believed, were those of Chinese migrants. But Fr Simon, who himself undertook a hazardous journey from his native Vietnam many years ago in search of a better life overseas, had a suspicion that the victims could be his country people. So when families started to contact him from Vietnam with stories of how they had lost contact with loved ones who were trying to get to the UK, he began to fear the worst.

‘When people are on the move like this, they keep very closely in touch with their families,’ he explains. ‘They call and text at every opportunity, every stage of the way, to reassure their parents and others that they’re safe.’ A break in communication, in other words, suggested bad news – so Fr Simon called the police to tell them of his fears. ‘They told me to gather all the information I could – because they, too, were starting to think the victims of this tragedy were Vietnamese.’

The heartbreaking hunch proved correct. It soon became clear that the eight women and 31 men found dead in the trailer – two of them boys aged just 15 – were all originally from Vietnam.

Since then, much of Fr Simon’s time has been spent ministering to a devastated community. A warm and friendly man who looks younger than his 61 years, he has been chaplain to the Vietnamese community in east London, as well as parish priest of the Church of the Holy Name and Our Lady of the Sacred Heart in Bow, for the last seven years – and although he has often had to deal with desperately difficult situations regarding Vietnamese migrants, nothing to date has been quite as horrific as the 39 deaths. A few days before we met, he’d been with the parents of one of the 15-year-old boys – ‘there were a lot of tears,’ he says – and he officiated at a prayer service at the spot in Grays where the gruesome discovery was made.

Fr Simon knows at firsthand what prompts people in Vietnam to take huge personal risks – because that’s exactly what he did in 1984. He was one of as many as 800,000 people who left the country, mostly in small boats, in the wake of the Vietnam war, communist rule, and economic sanctions. After school he had worked as a teacher – but the salary was barely enough to survive on, and the government put many restrictions on people in their ordinary life. ‘Everything was controlled,’ he tells me. ‘If people think we were escaping for a luxury life in the west, they’re wrong. It’s essentially about wanting to live in a place of freedom, and a place where people are properly respected.’

He was one of ten children, and his elder sister was the first to leave – she travelled to Norway, and once she had settled there, Fr Simon’s father decided he and his younger brother should go to join her. It was a perilous journey across the sea. ‘There were 19 of us crammed into a tiny boat,’ he remembers. ‘We had to pay for the fuel and for the expenses for the voyage, and then we had to just hope. Fortunately the weather was very good, the sea was calm – if there had been a storm, it could have been a very different story.’

There were several scary moments along the way, not least of which when their boat was intercepted by a Vietnamese naval ship, and it seemed as though the fleeing migrants would be arrested. But while the soldiers shot into the water around them, they eventually let them continue their journey. Later on, workers on an oil rig lowered food and water down to them. Eventually, they landed safely in Malaysia – and someone on the beach told them to sink their boat so that, when the police came, they wouldn’t be forced to turn back. ‘All those moments were incredibly lucky, because without them we might not have made it,’ he says. He journeyed on to Norway, where he worked as a teacher and translator for ten years.

He’d been raised as a Catholic – ‘I was an altar server aged five’ – and as a youngster had been in a junior seminary. In Norway, he became a catechist in his parish, and eventually realised he should re-start his studies for the priesthood. He moved to the UK to study at Allen Hall in London, and after six years was ordained in 1999, as a priest for Westminster diocese.

Today, Fr Simon spends much of his time trying to stop tragedies like the recent one in Grays. ‘I’ve gone back to Vietnam and told people, ‘‘do not try to escape this way’’,’ he says. ‘I know what it’s like myself – I know how strong the temptation is to want to get away. It’s something in every heart, this need for freedom and respect and dignity. But the risks are just too great – the potential for disaster is too great.’ In the aftermath of a tragedy like the recent one, he says, people will be deterred from making the journey to the west – but in time the memory of the deaths will fade, and the risk-taking will begin again.

What could make a real difference, he says, is proper investment in Vietnam. ‘At root, solving the problem means creating a country whose people could feel respected and properly enjoy their lives,’ he says. ‘We have to help create that community, and then people won’t need to try to escape. But Vietnam is very far from that moment: in fact some things, like pollution, are getting much worse there at the moment. In Hanoi, it’s sometimes difficult to even breathe.’

For now, his first priority is, he says, to mourn those who have lost their lives. After we’ve chatted over coffee, he takes me into the church to show me the shrine to the 39 in front of the altar. There’s an outsize arrangement of beautiful white and yellow flowers, and it’s a sad and moving sight. A book is open at a page with words written in Vietnamese: Fr Simon translates. ‘The Vietnamese community,’ he says, ‘greatly miss 39 victims who sacrificed their lives in the UK, on the way to seeking a life of freedom, dignity and happiness.’

It’s what all of us should be able to hope for – and through no fault of their own, his countryfolk had to leave their own shores to have a chance of finding it. That they even had to make the journey is heartbreaking; that they never reached their destination, and that so many lives were wasted, is tragic in the extreme.