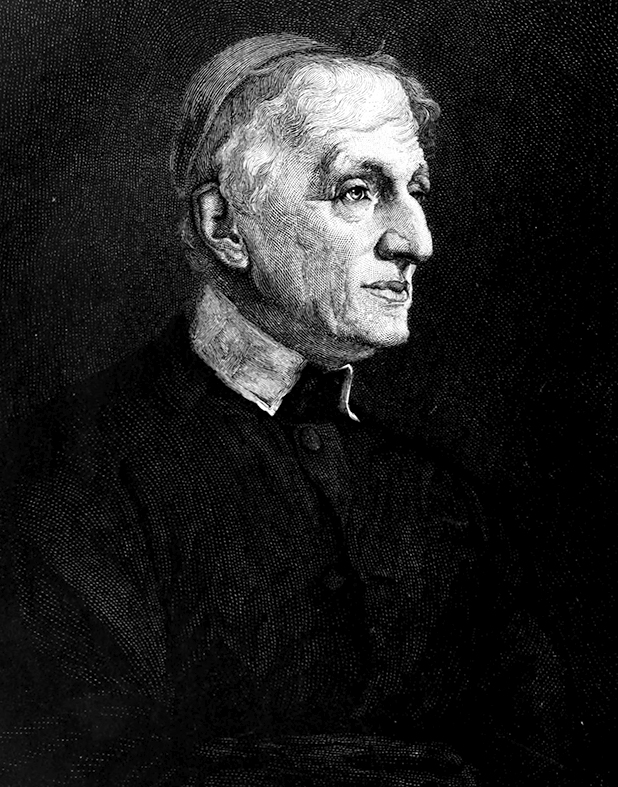 Written by Fr Peter Conley who is a priest in the Archdiocese of Birmingham.

The rediscovery of a school book doodle took Newman’s breath away. He recognised the hidden role Marian devotion had played from child to adulthood in his conversion to Catholicism.

I have drawn the figure of a solid cross upright, and next to it is, what may indeed be meant for a necklace, but what I cannot make out to be anything else than a set of beads suspended, with a little cross attached … the strange thing is, how among the thousand objects which meet a boy’s eyes these in particular should have fixed themselves in my mind, that I made them practically my own. (Apologia, p2)

He was not sure how he first came across these familiar symbols of prayer. Perhaps, he had seen them hanging up somewhere – rather like those rosaries attached to driving mirrors in cars and vans today. The Gospel can be preached ‘visually’ as well as ‘orally’. To this end, he joked about having drawn a ‘fat Madonna’ when attempting a rough sketch for a statue of Our Blessed Lady.

His studies of the Eastern Fathers, especially St Athanasius and St John Chrysostom, made him realise the importance of Mary as the Mother of God and model for every disciple, down the ages, to follow. In a letter to George Ryder, a recent convert struggling with the rosary devotion, he advises him to picture each mystery (Joyful, Sorrowful, Glorious). He points out that the Our Fathers and Hail Marys are designed to lead us into a deeper appreciation of God’s actions in the world (JHN, 19 September 1848, Maryvale, Letters and Diaries XII, p263).

The older he became, the more Newman realised how significant his artwork of the ‘gospel in miniature’ was. Preaching at Oscott College to commemorate the Feast of the Holy Rosary on Sunday 5 October,1879, almost a decade and a half since he first deciphered his sketch, he concludes:

Now the great power of the Rosary lies in this, that it makes the Creed into a prayer; of course, the Creed is in some sense a prayer and a great act of homage to God; but the Rosary gives us the great truths of His life and death to meditate upon, and brings them nearer to our hearts. (Sayings of Cardinal Newman, p44)

It allows us to connect with the Angels and Saints and the whole Church through time and eternity. This invites the question: have you ever wondered, or heard it asked by others, whether our departed loved ones know what is happening to us or not? ‘I do hope so’ has often been the response whenever I have offered reassurance to grieving families. Newman would also reply with a definite ‘yes’ and explain his reasons, informed by faith, in various ways. To begin with, because of his resurrection, Christ is able to be everywhere on earth. Therefore, he gathers up those who have died in him, and brings them to us. As a result, we can, according to Newman’s sacramental principle, experience their presence through prayer and, especially, in familiar locations.

We naturally love places which remind us of friends; and sights and sounds (and scents) change in our estimate of them by our associating them with those we love – and thus pain loses its acuteness, and bereavement its heartache, and worldly anxiety no longer dries up the spirit, when we by faith regard them as memorials of Him who once was a man of sorrows for us and acquainted with grief. (Sermons 1824-1843, Vol II, p183)

Newman taught that all created things are potential mediums leading us to Christ and the faithful departed who have died in Him. We can, therefore, be said to ‘meet’ them with, through and in Him – because of his incarnation, redemption, resurrection, ascension and the sending of the spirit at Pentecost. When shaping his ideas, Newman acknowledged Butler’s writings on religious metaphor, Keble’s poetic Christian Year and the Alexandrian Fathers. The emerging influence of his sacramental principle can be seen in a series of observations he makes after the death of his youngest sister Mary: ‘Here every thing reminds me of her. She was with us at Oxford, and I took a delight in showing her the place – and every building, every tree, seems to speak of her. I cannot realize that I shall never see her again.’ He also shares with Jemima that: ‘Dear Mary seems in every tree and hid behind every hill. What a veil and curtain this world of sense is! Beautiful but still a veil.’

And this invisible world is essentially a world of personal presences. Therefore it is by a linking of person with person that we come to it. Thus Mary is now a supernatural guide. Here on earth she was loved with a love that was stronger than death; therefore, now, when she has passed beyond the veil, she is not lost to the hearts that cherished her but draws them on to follow her to the place where she abides. Thus is memory, quickening like a seed through which life has forced a mysterious passage, raised to the level of a mystical experience. (Newman, His Life and Spirituality, p107)

Newman highlighted the importance of celebrating Mass as uniting ourselves with the Angels, Saints and the faithful departed. He placed memorial cards of friends and family all over the wall of his private chapel beside the altar. He pointed out that it is the role of our loved ones to intercede before God for us. It follows that we ought to take note of how we are being helped, as well as requesting further assistance from them. Six years before his own death, Newman writes to Mrs Maxwell-Scott on the loss of her brother-in-law and uncle:

I find Newman’s insights very comforting. He always pointed out that it is the vocation of those who have died to lead their loved ones to where they are. Hence, to James Stewart a recent widower whose daughter has just passed away, he says: ‘Yet you have not lost her. She has joined her Mother in heaven, to watch over you all and to bring you to her.’ (JHN, 4 August 1871, The Oratory, Letters and Diaries XXXII, p318).

« Hearing God Speak
Sponsored Swim for Prisoners – WE DID IT! »