Singing her Dreams: The Pope’s Diva 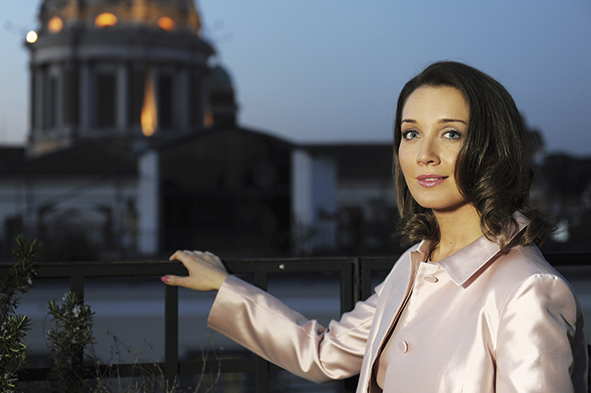 Carly Paoli was the voice of the Year of Mercy anthem, and a Pope Francis favourite. She’s half-Italian – but her roots, as Joanna Moorhead discovers, are firmly in the British Midlands.

‘They say all roads lead to Rome,’ says opera singer Carly Paoli, ‘and in my life, they certainly seem to have done that!’

Carly, who’s 29, was the voice behind the Ave Maria chosen by the Pope as the official song for the Year of Mercy. She says she couldn’t have been more thrilled, and treasures her memories of meeting Pope Francis. ‘He was smiling and so friendly; and he gave me a rosary which I’ll always keep, it means a lot to me,’ she says. ‘Singing that song has been a real highlight of my career so far.’

With her long black hair and filmstar looks, not to mention her exotic-sounding name, Carly is every inch the Italian; so it’s a surprise to learn that she was raised in a cul-de-sac in Mansfield, the daughter of a long distance lorry driver father, Paul, and mum, Tina, who worked in a travel agent. ‘My dad would leave the house at 4am most mornings and would often not be home ‘til late,’ she says. As a child she loved singing along to Disney videos: ‘even at the age of three or four,’ she says, ‘I was singing along to Beauty and the Beast’. She remembers on one occasion singing on the bus home, only to realise that everyone had gone quiet to listen to her, and that they were passing round a collection-box for donations.

So it was clear she had a talent, and by the age of nine Carly had told her mum that to be a singer was the career she wanted. Her parents duly enrolled her into theatre school, and took turns driving her to the lessons in nearby Chesterfield.

But, says Carly when we meet for coffee, it was her maternal grandfather who was perhaps the strongest influence in her career. He lived in Puglia, where her parents bought a house during her childhood, and summers were spent enjoying the long Italian summers. ‘The thing was that there were often fiestas, and a fiesta would inevitably involve plenty of music and singing,’ remembers Carly. ‘And at one point there was a big Mass in Torre Paduli, and my grandfather decided I should go along to audition to open the fiesta, so he drove me in his tiny Fiat Panda to sing for the priests. I was 14 at the time and it was my first big break: I sang to hundreds of people, and my grandfather was so proud of me!’ The Italian relatives, she says, were where the singing came from: one Italian uncle used to play the accordion and write folk songs, and a great-uncle, who worked as a cook for the Shah of Persia, was known as the singing chef as he would sing arias while doing the cooking.

At the age of 16 Carly won a scholarship to Tring Park School for the Performing Arts in Hertfordshire, and from there went to the Royal Northern College of Music in Manchester: by now, her heart was set on a classical singing career, which she says is a better fit for her voice than West End musicals – though she is a huge fan of Elaine Paige, and is tremendously proud of the fact that she once sang on stage with her. In 2014 she was heard by 16-time Grammy Award-winning producer David Foster, who invited her to make her international debut at his gala in Calgary, Canada. The following year came an opportunity to sing at Windsor Castle, following which she has added Prince Charles to her list of fans – he apparently asked her, after the performance, if she could send him her album, and invited her to sing at a Prince’s Trust concert.

At Windsor Castle she sang alongside Jose Carreras, which she says was very special: he’d been her grandfather’s favourite singer, and he was so kind to her. ‘He was such a wonderful gentleman: he knew how nervous I was, and he really helped me to relax. His advice was to eat pasta al dente with olive oil and parmesan before a performance.’ For the concert in Rome for the Year of Mercy she sang with Andrea Bocelli, and has since sung with him at the London O2. In Rome, she says, Bocelli said to her, as they came off stage, how beautiful she was looking in her red dress. ‘His wife must have told him what I was wearing,’ says Carly, because Bocelli is blind.

Italy has become a second home for Carly; her relatives there are Catholics, although she was raised Church of England and is, she tells me, closely involved in her local parish church, singing regularly at concerts and fundraisers there. She was raised Carly Hopkinson, but at some point along the way it was suggested to her that her mother’s maiden name sounded more like an opera singer’s name, so she switched to that – and has clearly never looked back.

Carly is now widely touted as an opera star in the making, and her 14-track debut album, Singing My Dreams, was released earlier this year. Recorded at Abbey Road Studios in London and at the Forum Studios in Rome, it begins with the heartwarming ‘Music of Heaven’ and moves on to ‘The Mystery of Your Gift’.

There are several Italian numbers – Carly is fluent in Italian, and says she even texts her friends and family in the language – including ‘Almeno Tu Nell’Universo’, and she’s penned her own English lyrics to Italian composer Ennio Morricone’s ‘Se Tu Fossi’ from his Oscar-winning Cinema Paradiso, a song which made number 2 in the classical music charts last year. Among four songs that showcase Carly’s skills as a lyricist is ‘Why’, penned in tribute to her little nephew, who asks lots of questions; and there’s also her words for the late James Horner’s Legends of The Fall. Another highlight is ‘Il Mio Miracolo’, a duet with the Italian tenor Alessandro Safina.

Probably the song that’s dearest to her heart is Memory of You, a song she wrote for her beloved grandfather, who died last year. Before we part we discuss, again, Italy: Carly adores the country, and would like to live there one day. She’s on the brink of a stellar career: not only singing her dreams, but living them too.