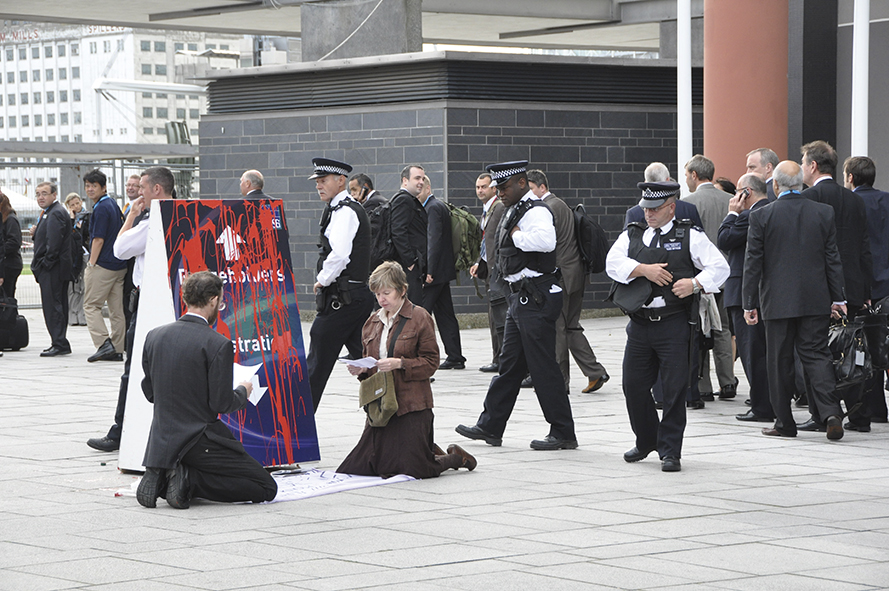 We are familar with the phrase ‘putting your money where your mouth is’ – Fr Martin Newell is an example of someone putting his faith where his mouth is – we met up with him to talk about his courageous witness in standing up against the scandalous and unjust arms trade.

Most Catholic priests who find themselves in prison are there as chaplains. Not Fr Martin Newell, though: he’s been an inmate several times, and is likely to be so again.

Fr Newell, 50, who is based in Birmingham, is what might be called a protest priest: like the Catholic priests and nuns who were arrested in Washington last week after demonstrating in support of US immigrants, he believes his vocation is not only to the religious life, but also to making a stand on issues he believes Christ, if he was on earth today, would have championed.

He’s currently facing legal action over an unpaid fine dating back to an act of civil disobedience at the 2009 London Arms Fair, when he and a religious sister covered a sign near the entrance to the fair in red paint. ‘We did it to symbolise the blood of innocent people,’ says Fr Newell, who was arrested, charged with criminal damage, and later fined £515. He has consistently refused to pay the fine, and was recently recalled to court to explain himself; magistrates have given him another 28 days to pay, although he made clear in court that he will not do so.

If he’s eventually sent to prison, he does at least know what to expect: in 2000-1 he spent six months inside after deliberately damaging a vehicle used in nuclear warhead convoys. ‘We got into the base and used hammers to damage the vehicle,’ he says. ‘It was symbolic, of course, but it also meant the vehicle couldn’t be used for something that is immoral.’ Fr Newell argues that direct action like this is the 21st century’s version of conscientious objection. ‘In traditional wars, governments needed young men to fight,’ he says. ‘But these days they don’t need men to fight, they just need all of us to stay silent, and to pay our taxes.’

His six months were served mostly in Bedford and Belmarsh prisons, and there were some unpleasant experiences. ‘Being admitted to the prison for the first time was terrible: the reception staff wanted to intimidate new inmates, and they were very aggressive,’ he says. ‘It was a horrible start.’ He also felt unsafe at times, and on one occasion had to intervene when a fellow inmate tried to commit suicide. ‘He’d slit his wrists – he survived, that time, but I’ve no idea whether he’s still alive now,’ says Fr Newell.

Being a priest as well as a prisoner made him a figure of some interest inside the prison. ‘I think the officers thought I was someone they could trust, and that I wasn’t likely to make any trouble,’ he says. There were some unusual situations: at one prison, the chaplain was a priest with whom he’d studied at seminary. And on one occasion, says Fr Newell, he was able to celebrate Mass in the prison chapel; at other times, he said the prayers of the Mass alone in his cell.

Born in Walthamstow and raised in South Woodford, Fr Newell first thought about becoming a priest at the age of 14, having been an altar server from the age of seven. After grammar school he studied economics at Southampton University, before doing voluntary work with, amongst others, the Jesuits, before going to Wonersh Seminary. After being ordained in 1997 he spent five years working in parishes in Brentwood diocese, before joining the Passionists in 2001.

But it was an ‘epiphany moment’ when he was a student that put him on the road to life as a protester. ‘I was looking for a way of being more radically committed to the option for the poor, and I had this sudden realisation that justice and peace work was what being a Christian was all about,’ he remembers. ‘I realised that, for me, being a Christian would mean living alongside the poor, being with the poor, working for them; and working for the causes I believe Christ would have worked for. I believe Jesus was a pacifist, and I believe that means I should be one as well. And the implications of that are using non-violent means to work for justice; I’m convinced that non-violent action is a legitimate and positive way of standing up for what I believe in.’

As well as the arms trade, Fr Newell has protested against the use of drones in warfare, and he’s currently directing his energy towards stands against climate change. ‘Climate change is the thing that keeps me awake at night,’ he says. ‘To me, it’s the equivalent of protesting against nuclear weapons in the eighties; in fact, it’s worse than nuclear weapons in one sense, which is that the damage is already being done. With nuclear weapons you could argue that it was about preventing them from being dropped: with climate change, the damage is already taking place. We’re currently sending carbon bombs into the air that will detonate in ten or 15 years’ time – and for some reason, we’re nothing like as scared about the implications as we ought to be.’

Now based in a house where he lives alongside asylum seekers, Fr Newell is part of the leadership team for the Passionists in England and Wales. He helps out in parishes, saying Mass and doing baptisms and funerals: but his vocation, he explains, is about hospitality and resistance. ‘This is my parish, this is my community,’ he explains. ‘The thing I often remember is that Christ was arrested, and so were most of his earliest followers. Should we obey God, or should we obey man? Being arrested isn’t the issue here; the issue is, why have you been arrested? Being a Christian is about being a faithful witness to Christ. We’ve got used to a Church that is part of the establishment, but is that right? Should we be on the side of the establishment?’ That, it seems to him, is one of the biggest questions the Church should be asking itself today.

« ‘Finding yourself is Key’
Singing her Dreams: The Pope’s Diva »