‘Finding yourself is Key’ 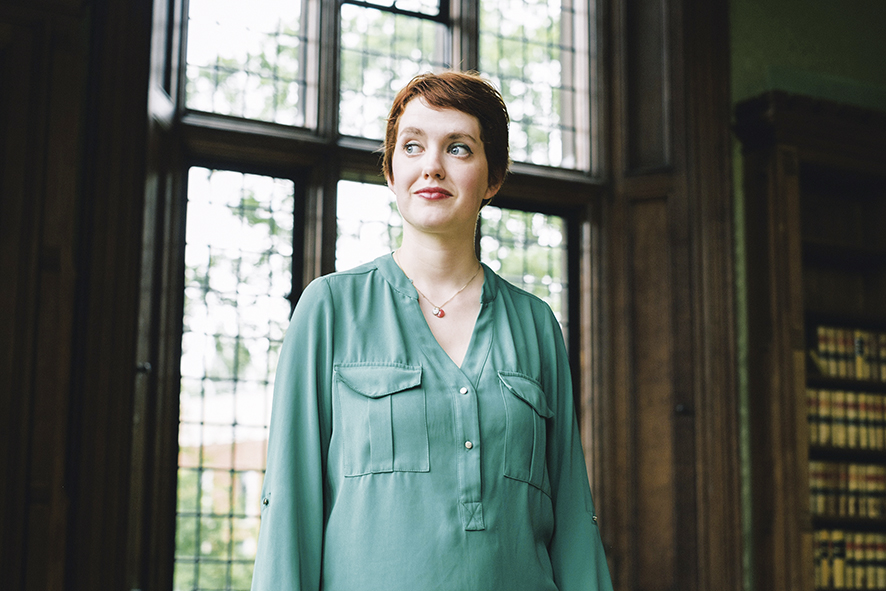 Katharine Welby-Roberts, daughter of the Archbishop of Canterbury, talks to Joanna Moorhead about the difficulties of growing up in a priest’s family – and how Christianity was crucial to recovering her mental health after a breakdown.

The Church, and Christianity, have been inextricably linked to the depression suffered by Katharine Welby-Roberts, the daughter of the Archbishop of Canterbury, who has been speaking out about her mental health to raise awareness of the condition.

It was being a vicar’s daughter, she says, that was at the root of her inability to ‘find herself’; and that was to have a severe and negative impact on her mental health. Justin Welby was an executive in the oil industry until, when Katharine was three years old, he made the decision to retrain as an Anglican priest. ‘He was ordained when I was six, and after that we moved around a lot, to different parishes and different communities in different parts of the country.’

Some of the parishes, Katharine recalls, had a population that was 95% white; in others, most people were from ethnic minorities. Some parishes were wealthy, others were poor. In all of them, Katharine learned to become a chameleon, and to fit in. ‘I would adjust quickly – my accent, my likes and dislikes – to where we were living. I liked the Spice Girls without ever having heard them sing. I became what I needed to be; and that was great for getting on with life at the time, but not so good for understanding who I was.’

Added to which, there was the social pressure. ‘I remember my dad saying, when we first moved to a new parish, be aware that people will know who you are, and what you do might be fed back to us. My parents warned us to watch our behaviour; you felt you should always behave as though people were watching. Not many children are defined by their parents’ careers, and it’s not easy.’

Today Katharine, the third of her parents’ six children, is 31 years old: she has the clear-eyed gaze of her father, and she’s vivacious and bright. But all of this, she explains when we meet in her cottage in Reading, hides her battle with depression: a battle she has written about in her new book, ‘I Thought There Would Be Cake’, in the hope that sharing her own experience may help others. Her depression is clinical, she says, but ‘I think not knowing who you are makes it harder to manage and harder to live with mental health problems. And it makes it difficult to identify as anything other than depressed and anxious. The problem for me was partly due to being unsure about what was me, and that was something I learned along the way. I got to 20 and realised there were so many things I didn’t know about myself, including what my accent was.’

Being raised as a vicar’s daughter also meant there were expectations about her faith, she explains. ‘Children of priests are either ultra-rebellious or ultra-religious. And I’m not rebellious, never have been – but nor have I gone down the super holy route either. I denied faith for a while: when I was about 21 I’d say, I’m not a Christian any more. I told my parents and my mum was like, ok…which I was surprised about, I thought they’d hit the roof.’

For a while Katharine didn’t have a lot of contact with her family: she joined the police force, and made her own way. But inside, she was under a huge amount of stress. ‘I disappeared into my head. The way I dealt with my problems was to have a conversation inside my head – that was my coping mechanism. But it was making me more ill, because I was so disconnected.’

It was after a split from her then partner that she suffered a breakdown, which led to a reconciliation with her parents. Her mother in particular, she says, has been a wonderful support. ‘My mum is my hero. She understands me, she understands my mental health. She can spot changes in my behaviour that mean I’m under pressure. I can tell her things. My dad is a great man, he loves me very much, but he’s very busy and it’s harder to talk to him. If we’re on holiday, I get a chance to talk to him: otherwise, I’d have to book myself into his diary.’

As well as her mum, the other significant person in her life is her now-husband Mike, an IT consultant. They were married in 2014 and spent the first few years of their married life in a flat in Lambeth Palace; and it was there that they started their family, with son Elijah who is now one. ‘At first I thought I might like a home birth and that was interesting, because there hadn’t been a baby born at Lambeth Palace for many years,’ she says. ‘But in the end the doctors advised against it. But Elijah spent the first eight months of his life with us in Lambeth Palace, where our flat was at the top of a spiral staircase which wasn’t great with a buggy. There was certainly lots going on: one day we went downstairs and bumped into John Kerry and the president of Nigeria. Another time we met Angelina Jolie, who was there meeting my father.’

Having Elijah has, inevitably, changed Katharine’s life; like all parents with young children, it forces her to live in the moment and to concentrate on her baby and his needs. ‘We go out a lot, which is good, and I love him to bits.’ Her parents’ first child, Joanna, was only a baby when she was killed in a car accident: having Elijah has made Katharine think about her parents’ loss in a whole new way, she says. ‘Joanna was always part of the family: we’ve always talked about her, we’ve always celebrated her birthday. But now I’ve got my own baby I can’t even imagine how it must be to lose a child: I simply can’t imagine my life without Elijah.’

Eijah’s name is testament to the fact that Katharine has rediscovered her faith. ‘I used to ask the why question a lot,’ she says. ‘But I think understanding who God is and reading the Bible means you realise that it’s full of stories of people who are really struggling in life, and God is still with them. God is so big, and yet He cares about us as individuals. God has made promises and He won’t let us down, and that’s what I came to realise. When Elijah cried out that he wanted to die, God gave him the strength to carry on through the journey.’

What she realised, says Katharine, was that God was there even when her life was at its toughest. ‘God is present if you’re willing to see it, but often we’re not willing to see it. The psalms are full of anger and sorrow and depression; and then at the end of them, there’s almost always a verse of praise. The fact is that God can take it; He allows us to rant and rage at him. And that’s worthy of praise.’

Her parents’ faith has inspired her own. ‘My parents are very real, and you don’t look at them and think they are perfect. When they get things wrong they apologise. They trust in God in a way that inspires me.’

As far as her own condition is concerned, she’s not ready to say she’s out of the woods: but she does feel she has amazing support in the shape of her husband Mike, and her mother Caroline. ‘It’s a vulnerability – I’ll always be vulnerable to mental health problems,’ she says. ‘But the key, for me, is accepting who I am, and knowing that who I am is ok. That’s crucial.’