Catherine of Siena The Peacemaker 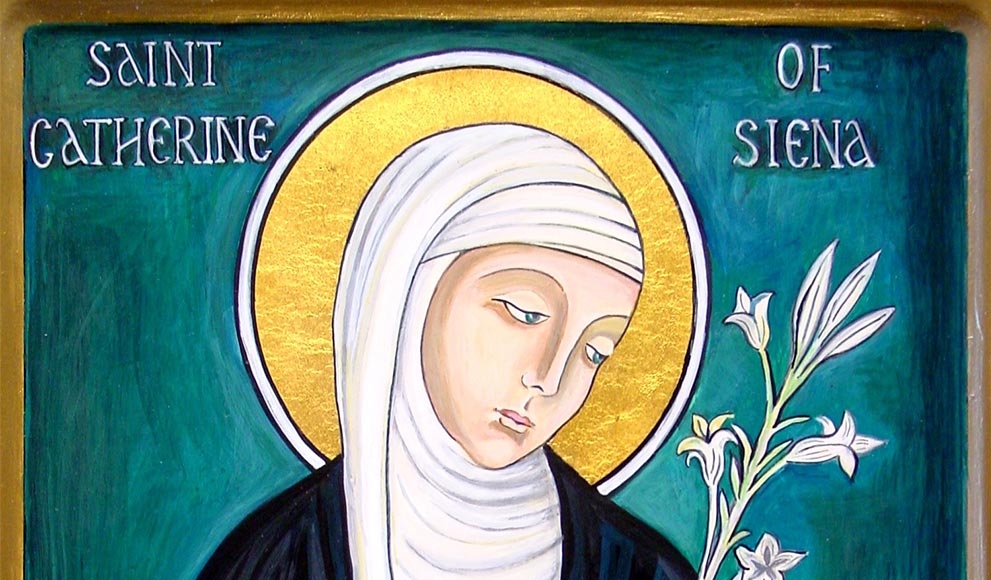 Pope John Paul II declared the remarkable Catherine of Siena one of the patron saints of Europe. In the light of her feast day on 29 April, Hazel Sillver looks at the life of this formidable Italian lady.

By the time Lapa Piagenti, the daughter of a Sienese poet, was forty years old, she had already given birth to twenty-two children! Being born in the plague-ridden Italian city of Siena in Tuscany, it is no surprise that only half of them had survived. Lapa somehow found the energy to give birth to two more: twin girls, who entered the world prematurely on 25 March 1347. Sadly one of the babies, Giovanna, died very quickly, but her sister, Catherine, survived.

Being such a merry child, the family named the young Catherine ‘Euphrosyne’, which is Greek for ‘joy’ and the name of a Saint. As a very young girl, she was able to see Angels as clearly as she could see people. And at the age of just six, she had a vision of Christ, whilst walking through the streets of Siena with one of her brothers. He was seated with some of His Apostles (including John, Peter and Paul), and radiant with Glory. She began talking to God by going to quiet places to pray and, at the age of seven, vowed to give her whole life to God.

When Catherine reached a suitable age to marry, her parents’ wished that she wed the widower of her older sister Bonaventura, who had recently died in childbirth. Showing early signs of her now famous formidable nature, Catherine refused and protested by fasting and cutting off her long hair. Years later, she would tell her confessor Raymond of Capua, that she got through the stress of losing her sister and being pressured to marry, by leaning upon Christ. ‘Build a cell inside your mind, from which you can never flee,’ she told him. This cell was a visual inner world, in which her Father (a cloth dyer called Giacomo) became Christ, her Mother Lapa became the Madonna and her brothers became the Apostles.

After having a vision of St Dominic at the age of sixteen, Catherine longed to join his Order. Her parents were not keen, until soon afterwards she fell ill with fever. Her Mother Lapa went to the Order of St Dominic and asked them to accept her daughter. Despite protest from the Order’s tertiaries (who were not happy because up until then those admitted had always been widows), the Order’s friars accepted Catherine. Within days, her illness vanished.

As a Third Order tertiary, she lived in the family home, rather than in a convent. She wore a habit and for a period of three years, lived almost as a solitary, rarely leaving her room (where she was at prayer) and only leaving the house to go to Mass and (to her family’s dismay) to give clothing and food to the poor.

At the age of twenty-one, Catherine had a remarkable vision of Christ, within which she was wed to him in what she described as a ‘Mystical Marriage’. The Virgin Mary took her hand and gave it to Jesus, who placed a ring upon it and then told her to leave her reclusive life and head out into the world.

Catherine began carrying out acts of charity for the poor and the sick, around Siena, and soon drew followers, who reported how charming, peaceful and wise she was. Not long after this, she had yet another intense mystical vision, in which she voyaged through Hell, Purgatory and Heaven, and was told to venture out further into the world. She began being more outspoken, even political, and journeyed around northern Italy preaching a ‘total love for God.’

Whilst in Pisa in 1375, Catherine received the Stigmata in the form of five wounds (upon her hands, feet and chest), which she hid from view.

It is no surprise that this remarkable woman soon had a huge influence over public opinion. By preaching and writing letters, she tirelessly worked to make peace between the quarrelling Italian states. In 1376, she even journeyed to Avignon, France, where she famously told off Pope Gregory XI for hiding overseas and persuaded him to return to his seat in Rome. She also travelled to warring places, for example putting herself in physical danger amidst riots in Florence; but her presence had influence and peace was declared between Florence and Rome in 1378.

She continued to hold favour with the Papacy and in 1378 went to live in Rome, at the instruction of Pope Urban VI. During the later years of her life, she wrote spiritual works, which are now considered some of the greatest early pieces of Tuscan literature. Her letters and prayers are much admired, but her key work is The Dialogue of Divine Providence, which she is said to have dictated during deep contemplative prayer, over the course of a year. It takes the form of a conversation between a devout soul and God. Here God describes the soul: ‘The soul cannot live without love. She always wants to love something because love is the stuff she is made of, and through love I created her.’

Probably because of her obsessive fasting, Catherine died very young, suffering a stroke in 1380 at the age of just thirty-three. Some decades later, she was canonized and has since become one of the world’s most beloved saints.

There are many miracles and legends surrounding the incredible St Catherine. Perhaps the most iconic is the tale of the Tuscan people secreting her head out of Rome for burial in Siena. When Roman guards opened the bag containing her head, they found it filled with nothing but rose petals, but upon arrival in Siena, it once again contained her head! For this reason, roses are sacred to St Catherine.

The words of St Catherine

‘The soul is in God and God in the soul, just as the fish is in the sea and the sea in the fish.’

‘The soul, as soon as she comes to know (God), reaches out to love her neighbours.’

‘It is only through shadows that one comes to know the light.’

‘Proclaim the truth – do not be silent through fear.’

‘There is nothing we can desire or want that we do not find in God.’

« Ten Easter Outings
A Cathedral For Our Time »