A Cathedral For Our Time 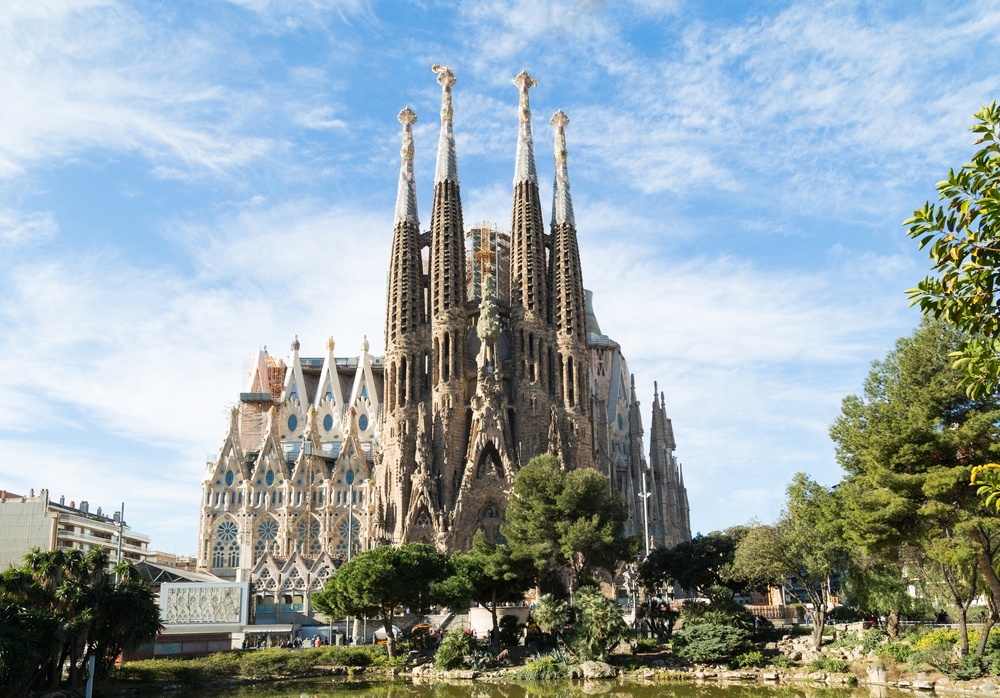 Most of the great churches we visit were completed generations ago. But the Sagrada Familia in Barcelona is a cathedral-in-progress, a new basilica for a new age. Joanna Moorhead went to visit.

It’s a sunny weekend in early spring, and I’ve just flown across Europe to visit a building site. But I’m in good company: in 2010 Pope Benedict did the same thing. He was charmed by what he saw amidst the blocks of stone and cement mixers, and I’m expecting to be charmed too. Because this is Antoni Gaudi’s magnificent Sagrada Familia, the continent’s most significant religious work-in-progress.

The first stone was laid here in 1882, and back then the surroundings were green fields and country lanes. In one of the earliest photographs taken here there’s a flock of sheep and goats passing by as the workers are laying their bricks. Today it’s very different: the great Mediterranean city of Barcelona has lapped its way to the cathedral door and beyond, and Gaudi’s masterpiece is very much caught up in the hustle and bustle of the city.

It is a masterpiece: there’s no doubt about that, more of which later. But what is most striking about visiting the Sagrada Familia for the first time is the realisation that this really is still a work in creation: you see the cranes stretching up into the deep blue sky above it long before you reach its breathtaking, almost molten, complicated façade. After all, in the cathedral-building timeline 133 years isn’t much of an age. Most cathedrals in the world – think Canterbury, Rennes, St Peter’s – took centuries to complete. Milan’s Duomo, begun in 1386, was finally finished in 1965. How often have you looked round a cathedral and read, in the guide book, that it was built across a couple of centuries? And this is how it is in Barcelona, right now, at the Sagrada Familia. We’re witnessing not the end of a story, but somewhere still before the beginning. And that’s awe-inspiring.

And what’s particularly awe-inspiring it is that Gaudi knew it would be like this. The Sagrada Familia is, more than anything, a tribute to his faith: but it was his faith in human beings, as well as his devout faith in Jesus Christ. Gaudi was raised in Reus in Catalonia, the youngest of five children born to the town’s coppersmith and his wife. After school, he moved to Barcelona with his brother Francesc in 1869; but a few years later his life was shattered by the deaths of both Francesc and their mother. The young Gaudi sought refuge in his architectural studies, having recently graduated after taking an architecture degree: his first project was for the lampposts on a square in the city centre in Barcelona, but soon he was moving on to grander projects, many of them inspired by his deep and devout Catholic faith: chapels, a college, the crypt of a church.

But then in 1883 came an extraordinary opportunity. The previous year, the first stone of a new cathedral had been laid: the Basilica of the Holy Family, or Sagrada Familia. Its original architect, though, had resigned from the project, and now it was offered to the young Gaudi. It was clear to him from the start that this was his lifetime’s work and, moreover, that it was not a work that could possibly be finished within his lifetime. His task, he knew, was to build as much of it as possible, but to give as much of a steer as he could to the architects and designers who would take the project over when he eventually had to hand it on.

Gaudi completely changed the plans for the cathedral, and he worked hard on it – despite, at the same time, revolutionising the architecture of the whole of Barcelona. Walk around the city today and it is dotted with a whole series of extraordinary buildings that owe their existence to Gaudi: the Casa Mila apartment building, whose roof is dotted with chess-like pieces of sculpture, and which hasn’t got a single straight wall in its entire construction; and Casa Batllo, another extraordinary undulating building which is especially striking floodlit, by night. Outside the city centre, meanwhile, he was working on the Park Guell, which was a kind of new vision for a town within a town, and is dotted with little invocations to the Virgin Mary. Gaudi lived at Park Guell, and his former home there is now a museum which tells the story of how his life was dominated by prayer and fasting, almost monk-like.

Gaudi’s other work is profound and it changed the way Barcelona was regarded by the rest of the world: he was the leading figure of a new art movement, Modernisme. But from 1915 he decided to put all his energies into just one project: the Sagrada Familia. He moved out of the Park Guell to the cathedral itself, living on his building site so that he could give all his time to his work there.

The logical thing might have been to have built the lower parts of the cathedral and to leave the upper elements to the generation who would come after him: but that wasn’t Gaudi’s way. He decided to complete one entire front, from the three that would eventually be finished, Sagrada Familia. The Nativity façade, which was the section he concentrated on, has doorways which represent Faith, Hope and Charity, and scenes from Christ’s birth and childhood are ranged around them, embellished with detail and symbolism.

For the rest of the cathedral – the other two facades were to be dedicated to Christ’s passion, and to his glory – Gaudi left detailed plans, taking into account that the architects and builders of the future would have new tools not available to him, and would also want to incorporate their own ideas. His ambition was to have at least the nativity façade finished by his death: but fate intervened. In 1926, on his daily walk to a nearby church for Mass, he was hit by a tram; several cab drivers, believing him to be a vagrant who wouldn’t be able to pay his fare, refused to take him to hospital. Eventually he was taken there, but he died a few days later. The streets of Barcelona were lined with people for his funeral procession, and he was buried where he had lived, in the crypt of the Sagrada Familia.

In the years that followed, the faith Gaudi had that his cathedral would be finished was to be severely tested. A few years after his death Spain was torn by civil war, and part of the basilica and Gaudi’s workshop and plans were destroyed by Catalan anarchists. For a while the project was put on hold: it was also unclear whether there would ever be enough money to finish it. But, as Gaudi once apparently said, his client was in no hurry: and the project, always funded by public donations, eventually became popular again. The Barcelona Olympics in 1992 helped put it back on the map and raised a lot more funding for it, and the team of architects and builders who work on the basilica today do so with the aid of the most up-to-date computer-generated technology. Gaudi’s belief has paid off, and the current aim is to complete it by 2026, the 100th anniversary of his death.

Visit it today and it’s almost impossible not to be moved by its drama, its intensity and – perhaps most of all – by its sheer audacity. Gaudi was inspired by nature, and standing in the nave feels almost like being in a clearing in the middle of a deep forest, surrounded by the tallest of concrete trees – the cathedral’s columns, which rise and branch off at the top to form the arched canopy of the ceiling above. The nave is dominated by the stained glass of the windows: warm reds and yellows on one side, cool greens, blues and turquoises on the other. The choir loft is perhaps the most imaginative of any church in the world: it’s a simple balcony, ranged around the entire perimeter wall: a kind of human surround sound. Everything about the building suggests breath and life, a tribute to the spirituality, in the widest possible sense, of humanity.

Back outside, one of the most striking features of the ornate building is the sight of fruits and vegetables atop the spires: this was Gaudi’s way of giving thanks for the basics of life. His vision, which once must have seemed so unlikely, is now a hair’s breadth from coming to fruition. Pope Benedict, on his visit here in 2010, consecrated the altar: it’s almost certain that whoever is Pontiff in 11 years’ time will follow in his footsteps, and say the inaugural Mass when the cathedral is finally complete. Gaudi, meanwhile, is being talked of as a possible saint: perhaps one day his beatification will take place in this very building he devoted his life to, and bequeathed as his gift to generations to come.