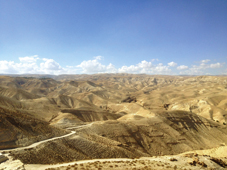 Why do we fast during Lent? And what do the traditions of veiling icons and sprinkling ash signify? Hazel Sillver looks at the history and meaning of 12 Lenten customs.

The Judean desert, which lies to the east of Jerusalem, is the landscape of Lent: it is where Christ retreated to be alone with God, for 40 days and 40 nights. It’s a beautifully rugged countryside: not a flat plain of sand, but an area of escarpments and deep ravines. We seek to recreate this atmosphere of retreat during Lent: but that’s not all – we are party, too, to other Lenten goings-on, such as laying purple cloths on the altar, the marking of foreheads with ash and (very important) eating hot cross buns. So what are the origins of these traditions?

The Lenten period echoes the amount of time Christ spent in the desert: also, it’s exactly the same amount of time that Moses spent on Mount Sinai and the period between Jesus’ resurrection and ascension. In many cultures and religions, 40 days has always been considered a holy length of time, representative of death, habit breaking and forming, and of initiation.

It is said that God is most readily felt in wild, silent places. As we hear the voice of the Divine saying in Hosea (2:14): ‘I will lure her and lead her into the wilderness, and speak softly to her heart.’ The desert was not the only place Our Lord loved to retreat to – he often rose early and went up into the hills to pray alone. During Lent we follow his lead by retreating, perhaps to a monastery or to a hideaway in the hills, to be
with God.

Shrove Tuesday (or ‘Pancake Day’) is the feast immediately ahead of Lent – the feast before the fast. In France it’s known as Mardi Gras (‘Fat Tuesday’). In the UK, Australia and Canada, stacks of pancakes are made with the ingredients that are traditionally given up during Lent (sugar, eggs and milk); yet the custom predates Christianity. In pagan traditions, the pancake represents the sun and is eaten to celebrate the lengthening daylight hours of spring. Today, in many towns, a pancake race is held in which contestants must run and flip pancakes at the same time! This fun harks back to a woman who lived in Olney, Buckinghamshire, in medieval times who was busy making pancakes when she heard the church bells ringing; not wanting to miss the service, she ran to church still carrying her frying pan.

Ash Wednesday is the first day of Lent, when it is customary for Christians to be blessed with the ashes of burnt palm branches that were blessed on Palm Sunday. The priest will either sprinkle ashes on the crown of the person’s head or mark them on the person’s forehead in a crucifix shape, while saying the following, somber, words: ‘Remember that you are dust, and to dust you shall return’.

Almsgiving is closely connected to the tradition of fasting. Traditionally, the money we save on giving up meat, alcohol and other riches during Lent is donated to the poor. Many Christian families have a Lenten alms jar in the kitchen that is gradually filled over the course of the 40 days. Some also donate unwanted clothes or ‘fast’ on leisure pursuits and instead give their spare time to help out a neighbour or a charity.

Traditionally eaten between Shrove Tuesday and Good Friday, the hot cross bun is lovingly toasted, drenched in butter and washed down with a cup of tea. There are umpteen superstitions associated with these humble fruit buns: for example taking one aboard a boat is said to guard against shipwreck, hanging a bun in the kitchen protects against fire and sharing a hot cross bun with somebody will ensure good friendship during the year ahead. It is also customary for Christians to kiss the cross of the bun before eating it, as a nod of love for Christ.

Mothering Sunday (also known as Mother’s Day) is a Christian celebration that falls on the fourth Sunday in Lent. Harking back to the 16th century, it started out as the custom of travelling to your ‘Mother church’ (usually the nearest cathedral) for Mass. People attended these Laetare Sunday services with their mothers and often the whole family. On the way, children would pluck wild flowers to give to their mothers and the church; eventually this developed into the now established practice of giving mum a gift on Mother’s Day.

Our Lord fasted in the desert and Christians go without certain foods during Lent. The custom came from the idea that doing without heavy, rich, soporific food aided prayer. Many Christians give up meat and alcohol during Lent; and some also forgo sugar, fat and all animal products (such as milk and eggs).

One of the most striking images of Lent is to see a sparse church brilliant with the purple vestments of the priest and the purple cloths of the altar and pulpit. Purple is the colour of royalty and thus represents Christ – when the rest of the church is bare (because many churches do not allow flowers or lit candles during Lent), our eyes are drawn to this blazing holy purple, reminding us to focus our hearts on Him and nothing else. Violet dye was originally garnered from the secretions of a type of sea snail. Being so hard to obtain and worth more than gold, it was associated with people of power and royalty, since they were the only ones who could afford it. Because the colour became synonymous with Lent, it gradually came to represent penance as well.

In some Catholic communities (particularly in Spain and South America), crucifixes, images and statues are veiled with purple fabric or removed from the church during the whole of Lent (or the last two weeks of Lent). There could be many reasons for this – some relate it to Jesus hiding himself as he left the Temple (John 8:59) and others with him being concealed from view in the desert; but could also be,  representative of us focusing our minds upon nothing but Christ during Lent; and of God protectively concealing us whilst we pray.

In many parts of Europe, Christians eat pretzels from Ash Wednesday to Easter. Despite its elaborate shape, the pretzel is a very simple bread made with water, salt and flour because eggs, lard and dairy products were once forbidden during Lent. It’s thought that pretzels were created by German monks in the fourth century and that, in times gone by, they were hidden for children to find, just as Easter eggs are today. The curious shape of the pretzel represents the arms of the devout crossed over their chests – the old stance held during prayer. The breads were thus known as bracellae, which means ‘little arms’ in Latin; this gradually became brezel in German, and then eventually pretzel. Over time, pretzels became symbols of good luck and were given to the poor during Lent.

The word for the day before Lent, Shrove, derives from shrive, which means, ‘to confess or hear confession’. This is the start of what will be a 40-day inner conversation with God. The root of the word confess is com (‘together’) and fari (‘speak’); during the desert-like Lenten time, the ambition is to converse with God in the depths of our hearts.

« Pope Francis 10 New Year Resolutions
When God Calls, How do we Answer? »