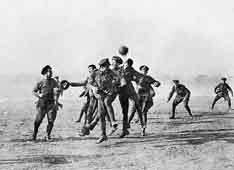 A hundred years ago this Christmas, one of the most remarkable truces in history took place when soldiers from the German and British forces exchanged gifts, sang carols in no man’s land and played football. Lucy Russell looks back to a moment when hope and humanity triumphed over misery and war.

When war was declared in August 1914, most people in Europe believed that ‘the boys’ would ‘be home by Christmas’. In fact, hundreds of thousands of ‘the boys’ spent Christmas 1914 in the trenches on the Western Front in France and Belgium – and there would be another three Christmases before the war was finally over.

By December 1914 those on the Western Front had endured an autumn and early winter of rain, foul and muddy trenches, daily killing and dead bodies in view. ‘You couldn’t bury the dead because if you tried, they’d shoot you,’ says Michael Jurgs, former editor of Stern magazine and author of The Small Peace in the Great War. ‘So you always had to look on the no man’s land and see you own future, which was to lay dead there.’

Pope Benedict XV, who had taken office in September, soon after the start of the war, called for a Christmas truce. This was officially rejected, but Christmas was not forgotten by the German or British Governments. The German Government sent thousands of small Christmas trees, and candles for them, to the front. On the British side, military shipments were suspended for 24 hours so that 355,000 brass boxes embossed with the profile of Princess Mary, the King’s daughter, and filled with various items including tobacco, confectionary, spices and pencils, could be delivered. With the exception of some Indian troops in the British Expeditionary Force, almost all those involved with the fighting came from countries where Christmas was widely celebrated.

On the German side, many units were from Saxony and Bavaria. These troops shared their Catholicism with their French and Belgian enemy. At this early point in the War the troops were yet to be hardened by events like the introduction of poison gas (used for the first time in the second Battle of Ypres in 1915) and the Battle of the Somme (1916) in which the British Army suffered 420,000 casualties (60,000 on the first day alone), the French lost 200,000 men and the Germans nearly 500,000. In December 1914 that which the troops on both sides shared – their humanity – was more significant than the fighting.

What has famously become known as the Christmas Truce was a series of unofficial ceasefires along the Western Front around Christmas 1914. According to historian John Keegan, by Christmas 1914 the dead already numbered about 306,000 French, the Germans had lost around 241,000 and the Belgians and British about 30,000 each. Against this the truce stands out with particular poignancy: the events that occurred 100 years ago this December were a spontaneous and symbolic moment of peace and humanity.

For a short time the fighting stopped. The truce began on Christmas Eve, when German soldiers started to sing Silent Night (Stille Nacht). British troops began to clap and responded favourably to the singing. Gradually both sets of soldiers ventured out into no man’s land, the ground between the British and German trenches (which on the Western Front ranged from 100 to 300 yards apart). The soldiers exchanged food: Dresden Stollen cake and sausages for jam and whisky; they swapped souvenirs, recovered and buried some of the dead, and played games of football with each other. They shared Christmas rituals of carols and gifts eased the fear, suspicion and anxiety of initial contact as first a few warily ventured out of their trenches, soon to be followed by dozens of others armed only with schnapps, pudding, cigarettes and newspapers.

German lieutenant Kurt Zehmisch wrote in his diary, ‘Soldier Mockel from my company, who had lived in England for many years, called to the British in English, and soon a lively conversation developed between us’. A couple of soldiers from each side then climbed out of their trenches, shook hands in No Man’s Land and wished each other a merry Christmas. They agreed not to shoot the following day. ‘Afterwards, we placed even more candles than before on our kilometre-long trench, as well as Christmas trees,’ Zehmisch wrote. ‘It was the purest illumination…the British expressed their joy through whistles and clapping. Like most people, I spent the whole night awake. It was a wonderful, if somewhat cold, night.’

One German infantryman described how on Christmas Day, when both sides climbed out of their trenches and over the barbed wire, a British Tommy had set up a makeshift barber’s shop in No Man’s Land. The barber was ‘completely indifferent’ to whether his customers were German or British, and charged a couple of cigarettes per haircut. Bavarian Josef Sebald observed, ‘This was war…but there was no trace of enmity between us.’ Fraternisation (a word which comes from the Latin frater – brother – and literally means ‘turning people into brothers’) was more common in the British sector than in the French or Belgian and mostly involved Catholic Saxon and Bavarian regiments. One British participant, Murdoch M. Wood, said in 1930: ‘The fact is that we did it, and I then came to the conclusion that I have held very firmly ever since, that if we had been left to ourselves there would never have been another shot fired.’

According to Jurgs, the fraternisation was made possible because many of the German soldiers spoke good English as they had worked in Britain. ‘They had worked as cab drivers and barbers in places like Brighton, Blackpool and London,’ he said. ‘When war broke out in August 1914 they were forced to go home. Some even left families behind in England.’

While many officers took part in the Christmas Truce, top officials on both sides were outraged, ordering their men back into the trenches and threatening court martial whenever they heard about it. One Austrian solider billeted near Ypres complained that in wartime such understanding should not be allowed: his name was Adolf Hitler. The Great War laid the foundations for the Second World War a generation later, and what Hitler exploited from early in his political career was difference, scapegoating particular groups for social problems faced by society, and using legislation, speeches and other propaganda to set these groups apart. The Holocaust represents the power of ‘othering’. The Christmas Truce, represents entirely the opposite: the power of togetherness.

In some parts of the front the ceasefire lasted for several weeks after Christmas Day 1914. Inevitably, though, the slaughter resumed. ‘The English are extraordinarily grateful for the ceasefire, so they can play football again,’ Gustav Riebensahm of the 2nd Westphalian regiment, wrote in his diary. ‘But the whole thing has become slowly ridiculous and must be stopped. I will tell the men that from this evening it’s all over’