The Humour of Pope Francis 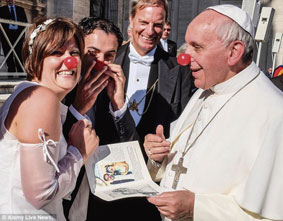 It is said that laughter is the best medicine. Faith Today looks at how Pope Francis is changing the perception of the Catholic Church through his own ‘joie de vivre’.

The joy of holy people springs from the depths of their being. Indeed, it is their being,’ writes Timothy Radcliffe. Pope Francis would seem to prove him right, but then, St Francis of Assisi whose moniker the Pope chose, was a man of exuberant joy. Cardinal Basil Hume, when Abbot of Ampleforth, once counselled his monks: ‘Take life seriously. Take God seriously. But don’t, please don’t, take yourselves too seriously.’ From his very first days as Pope, Francis has shown he has a sense of humour, which is one of the ways he reveals God’s love.

Humour is one of the most important things in everyday life. It is through humour that we can really see and appreciate the best and most beautiful things in life: love and friendship. St Thomas Aquinas said, ‘There is nothing on this earth more to be prized than true friendship.’ If you think about the people that you most enjoy being around, the people that make you happiest, and some of your favourite memories of being with those people, many of those times will involve humour and laughter.

Indeed, scientific research has suggested that people feel less pain after a good laugh, because it may cause the body to release chemicals that act as a natural painkiller. Professor Robin Dunbar of Oxford University, who led research published in 2011, believes that uncontrollable laughter releases chemicals called endorphins into the body which, as well as generating mild euphoria, also dull pain. Professor Dunbar has also suggested that endorphins also make people more susceptible to developing bonds. ‘The next stage will be to see whether laughing really allows groups to bond together and work as a group better and act more generously towards each other,’ Professor Dunbar has said. Anthropologists believe that laughter dates back millions of years, we were laughing long before we were verbally communicating; indeed, babies learn to laugh before they learn to speak. At its base, humour is a connection between people that goes far beyond language. Professor of psychology and neuroscience, Robert R Provine, has said, ‘We laugh 30 times as much when we’re with other people than we do when we are alone. Laughing is not a solo activity.’ Laughter then, it would seem, is about community and bonding.

One of the desert fathers was irritated to see a group of young men walking by, happily laughing, and shouted out, ‘We must face the last judgement, and you laugh!’ But, points out Timothy Radcliffe, for the first 1,500 years of its existence mainstream Christianity shared the conviction that the principal reason for being a Christian, or indeed doing anything at all, was to be happy.’ Radcliffe goes on to quote St Augustine, who believed that delectation, delight, was the mainspring of all human action, ‘For we must perform our actions in accord with what brings us most delight’; ‘Who can consciously embrace anything that does not delight him?’

Indeed, in the Sermon on the Mount Jesus taught the crowds that happy were the poor in spirit; the gentle; those who mourn; those who hunger and thirst for uprightness; the merciful: the pure in heart; the peacemakers; the persecuted; and those who are abused and persecuted, because the word blessed comes from the Greek word makarios, which means to be happy or blissful, but it also means a self-contained happiness. The Greeks called the Island of Cyprus ‘the happy isle.’ They believed that because of its geographical location, climate, and fertile soil, anyone who lived on Cyprus had succeeded in life. And the term they associated with the island was makarios. They believed everything you needed to be happy was right there on Cyprus. We can’t all move to Cyprus, but what we are offered as Christians is a similar self-contained happiness and the opportunity to be genuinely happy in ourselves as blessed followers of Christ. St Thomas Aquinas maintained that happiness was one of God’s names: ‘The chief good and final end of man is happiness’.

A day or two after the election of Pope Francis we began to hear stories about his sense of humour. There’s the one about how he turned to his fellow cardinals after his election and said impassively, ‘May God forgive you for what you have done.’ The Pope’s spontaneity was publicly revealed when he cracked two jokes after his very first Angelus in front of thousands. In fact, if you type ‘the humour of Pope Francis’ into an online search engine, there are numerous examples of quips he has made and anecdotes about his sense of humour: Archbishop Mario Poli, who succeeded him in Buenos Aires, told an Argentine news agency that on a visit to Rome, Pope Francis joked that he hadn’t moved into the plush papal apartments because he was worried about getting mugged; in July last year he joked with the crowd at the Basilica of the Madonna of Aparecida during a visit to Brazil asking their permission to speak Spanish instead of ‘Brazilian’; and last November Pope Francis appeared at the Vatican and put on a red nose to congratulate a couple getting married there who were from the Rainbow Association Marco Iagulli Onlus, a charity which brings clown therapy to sick children.

On Valentine’s Day this year 25,000 people who were engaged to be married were invited to a gathering with Pope Francis in St Peter’s Square where the Pope delivered a mostly improvised speech to the couples, and underscored his point that they should not be afraid of the difficulties that they might encounter during their married life with a mother-in-law joke: ‘We all know the perfect family does not exist. The perfect husband does not exist and the perfect wife does not exist,’ he said. Then, after pausing as if for comic effect, he added: ‘Let’s not even talk about perfect mothers-in-law.’ The crowd roared with laughter.

As it says in the book of Ecclesiastes: ‘There is a season for everything, a time for every occupation under heaven’. Indeed, it is written that there is ‘A time for tears, a time for laughter; a time for mourning, a time for dancing.’. (Eccl 3:1-8).

The Pope’s sense of humour is very special and has much to teach us. Pope Francis is probably the most humble and accessible Pope in modern history. He is a keen Twitter user himself and regularly posting tweets on his own feeds in nine languages which boasts more than 10 million followers. It would seem that he is genuinely funny and laughs easily. Pope Francis moves through life with the blessedness of a man who knows that even if he’s the Supreme Pontiff, his life and fate rest in the hands of an even bigger authority: a God who loves him and the rest of us more than we could ever imagine. And that is certainly something to be happy about.