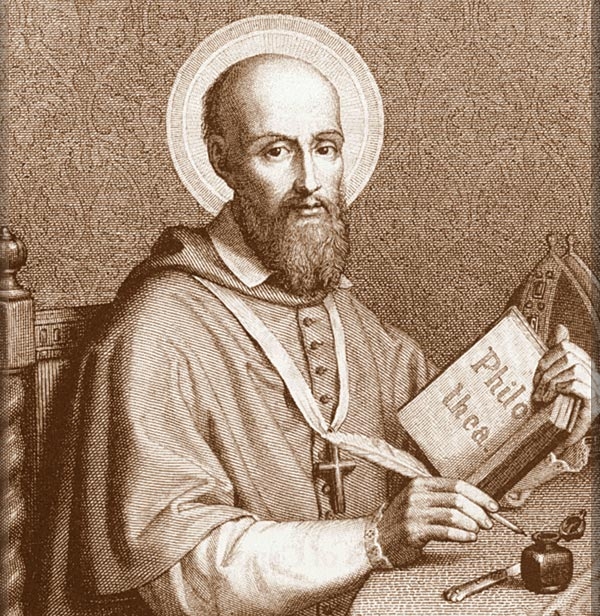 Francis was born in 1567 in the castle belonging to the Sales family in Thorens, Savoy, located in what is now south-eastern France. He studied in Paris and Padua. It was during his student days in Paris that he experienced a great spiritual crisis verging on despair, fell ill and was unable to eat or sleep. He cried out to God in desperation and, although overwhelmed by the sense of his own spiritual weakness, he vowed his love for God, placed his hope in his mercy and promised to praise him always.

In the depths of his anguish he went to the church of St Stephen in Paris, where he knelt in front of the image of Our Lady of Kind Deliverance. He promised that if he was freed from his inner agony, he would recite the rosary every day. At that moment his eyes fell on a card bearing the Memorare of St Bernard. He recited the prayer and experienced a complete transformation. He felt like a leper suddenly seeing his sores vanish before his eyes. A great peace came over him – he was healed.

This profound experience of God’s unconditional love was the bedrock for all his future theological studies and writings. The gospel came alive for him – Jesus came not to condemn, but as his Saviour.

The response of love

Francis understood the essence of human freedom. The great choice facing every human being is the freedom to respond or not to respond to God’s love – Francis chose to respond. He followed God’s call to priesthood, was ordained at the age of twenty-five and consecrated Bishop of Geneva at the age of thirty-five. He lived in Annecy until his death twenty years later.

Francis took seriously the call of the Council of Trent to restore the unity and vitality of the faith. When he became bishop, he took care that all priests in his diocese were well formed spiritually so that they could function as true shepherds of their people. He encouraged his priests to study ‘everything good’. He believed that learning for a priest was the ‘eighth sacrament of the Church’, knowledge of Scripture and theology being necessary for the personal holiness of the priest. He always encouraged gentleness and compassion.

Shortly after becoming bishop, Francis met Jane de Chantal, a young mother recently widowed. He became her spiritual director. Between these two saints there grew a deep spiritual friendship. Their relationship was most evident in the letters they exchanged. All their correspondence had engraved on it the motto ‘Live Jesus’. To allow Jesus to live was the very heart of their friendship and the love of God, revealed in him, pervaded every line of their letters. Their friendship was anchored in a common love of God.

‘Let us belong to God in the midst of much busyness’. It is there, in the midst of the world, that God has planted the worker, housewife, student and parent.It was God who made their friendship possible, and gave them to each other as spiritual friends to support each other in their commitment to him. Together they gave shape to the new spiritual family of the Visitation Sisters. Francis and Jane show us clearly that the deepest intimacy among people is an intimacy that finds its origin and its goal in God who gave people to each other to be incarnate signs of his divine love.

Francis saw humanity as the vessel which could contain the miracle of divine life. The human person had the most compelling vocation – to realize his or her fullest capacity for the love of God. This love, Francis said, has ‘two arms – one is the love of God in prayer; the other is the love of God known by loving care for others’. Every Christian is capable of living out the gospel calling in the ordinary events of everyday life. His Introduction to the Devout Life provides practical direction for building up the whole Christian community, giving encouragement to the laity to develop a life of prayer and love that would animate the whole body of Christ. He showed great sensitivity and compassion for the weaknesses of human nature and encouraged the practice of ‘little virtues’. It is in the situation in which we find ourselves that we are called to love and serve God: ‘Let us belong to God in the midst of much busyness’. It is there, in the midst of the world, that God has planted the worker, housewife, student and parent.

Christ in the heart

In all his direction of souls, Francis stressed the centrality of the heart as the place of conversion and transformation. There we can gently return to God, curbing the impatient, angry retort and responding with gentleness, humility and simplicity. ‘Learn from me, for I am meek and humble of heart’ was his most quoted passage from Scripture and the constant goal of his life. As we ‘learn Christ’ and are conformed to him, he lives in us and so is radiated with love to the world. Francis relied on the metaphor of the almond tree (an image shaped by the particular botanical knowledge of his day).

Francis letter to Jane:
Next to love of God, I commend to you love of his Bride, the Church. Have compassion for all pastors and preachers in the Church. Notice how they are scattered over the world. Pray for them so that they may obtain the salvation of souls at the same time that they are saving themselves.Men engaged in horticulture tell us that if a word is written on a sound almond seed and it is placed again in its shell, carefully wrapped up and planted, whatever fruit the tree bears will have that same written word stamped on it. I cannot approve the methods of those who try to reform a person beginning with external things. On the contrary, it seems for me that we should begin within. Since the heart is the source of actions, as the heart is, so are they. When Jesus is written in the heart it will produce actions bearing the stamp of the sacred name.

Francis loved the Church. He was acutely aware of the spiritual turmoil, laxity and erroneous theological views that prevailed in his day. This did not blind him to the Church’s heavenly origins. Rather, it spurred him to work for renewal. To Jane he wrote:

Next to love of God, I commend to you love of his Bride, the Church. Have compassion for all pastors and preachers in the Church. Notice how they are scattered over the world. Pray for them so that they may obtain the salvation of souls at the same time that they are saving themselves.

A sure guide to heaven

When Francis died in 1622, aged fifty-five, he left behind many theological works, a vast range of correspondence, a renewed diocese, a new religious order, and men and women in every walk of life dedicated, through his direction, to holiness of life. The holiness that Francis presents is attractive to ‘little souls’ – one comes to God in prayer without anxiety, with peace and humility. To a woman worried about prayer he wrote: ‘We must keep our hearts open and wait for the heavenly dew to fall. Never forget to carry this thought with you to prayer.’ Because of his writings, he became patron of writers and journalists. His Introduction to the Devout Life was a best-seller and his Treatise on the Love of God is a spiritual classic. He was canonized in 1665 and declared a Doctor of the Church in 1877. With this declaration, the Church presented the teachings of Francis de Sales to all the faithful as a most sure guide to true holiness – a sure guide to heaven. ■

« Jesus’ Baptism – Anointed with the Spirit
Tears at Night, Joy at Dawn – An Enduring Christian Classic »