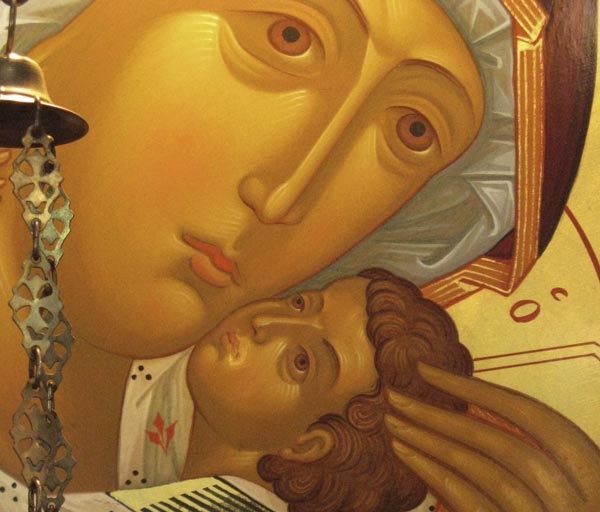 New Years Day, is the Feast Day of Mary, Mother of God. Fr James Hanvey SJ invites us to ponder on the treasure who is Mary, our Mother in faith and her importance in understanding living and our faith.

Most people think of beginning the New Year with some ‘resolution’. Usually, they are short lived. Somehow lack of will-power or circumstances manage to defeat us. Even if we are hardened New Year anti-resolutionists – too pessimistic to be caught out again – there’s something inside, even if it is only a flickering desire, which suggests we want to begin this year with a new set of habits.

Christ is fully human and fully divineThe Church doesn’t begin the year with a resolution but with a beautiful feast, the solemnity of Mary, The Mother of God. It brings to completion the octave of Christmas – those eight days by which the Church prolongs her contemplation of the central mysteries of Christmas and Easter.

What better way to begin the New Year than placing it in the hands of the Mother of God?  She is the one who faced the unknown of time with her ‘yes’ to God and to his purpose. Hers is the face that the Christ-child saw when he first came into the world. Her smile, of loving recognition, was the one that welcomed him into the family of his people and of the human race. She is the one who not only gave birth to Christ but who cared for him throughout all the years of his childhood. Her love and care never left him, even at the hour of his death, and was there to meet him again in his glory.

The solemnity of Mary, Mother of God, which replaces the feast of the circumcision, is a relative new feast in the universal calendar of the Catholic Church. Yet, it is an ancient devotion. The title ‘Mother of God’ or ‘Mother of God Incarnate’ – in Greek, Theotokos, goes back to the 3rd and 4th centuries and was defined at the Council of Ephesus in 431. It was, however, a controversial title in the early disputes about the person of Christ. Some objected that it compromised the divinity, but in reality it asserts the fullness of the incarnation: that Christ is fully human and fully divine. In this sense, Theotokos, is really a Christological title not only a Marian one.

We should never underestimate the audacity of our Christian faith. It challenges our way of thinking both about God and about what it means to be fully human. The incarnation is the revolutionary context for all Christian thought and life. It transforms our understanding of God for whom nothing is impossible and to whom nothing he creates is a barrier to his presence. It opens up the profound mystery of the Blessed Trinity whose life we are destined to share through the grace of Christ.

Mary’s title of Theotokos is not just one of honour; it is one of reality and substance. It belongs especially to her not only because from all eternity God has chosen in this most natural and humble of ways to come among us, but because she shows that God does not diminish our freedom, he fulfils it. There is a sense in which Mary’s  ‘yes’ – the magnificat of freedom which her Son brings to her – is not only her assent to God’s plan for her, but her assent to herself, Mary, the one God has created and to whom he has given such a destiny.

All of this is in virtue of the Son she bears: Jesus, Emmanuel, God with us and Saviour of humankind. So, we can never separate Mary from her Son. If we do she becomes unintelligible.

At the same time, Mary, the Mother of God, shows us something of the mystery of redemption in each one who accepts Christ.  He takes nothing from our humanity but gives us all that we need to live it in its fullness. In our ‘yes’ to him and God’s will for us, we find our true selves. And in every ‘yes’ we find we are supported and accompanied by the Mother of God. She teaches us that our ‘yes’ is not only possible but that it will bear fruit for God’s glory and the healing of his world.

Paul VI, who inaugurated the feast, also coupled it with the World Day of Prayer for Peace. It represents a deep insight on the part of the Pope for Mary is also the Queen of Peace. Never has peace been so much desired and needed in our tortured world.  The peace of Christ is not just an absence of conflict, a momentary truce between nations and peoples; it cannot be achieved through treaty or force but only through conversion of heart and mind. The conversion of mind is just as important as the conversion of heart. While we go on believing that peace is only pragmatically possible through a balance of force or threat then it will always be elusive. Only when we see peace as more than the absence of conflict, and grasp the destructive horror of violence, its moral and spiritual degradation, the history that it creates to imprison humanity, will we have the will to change.

Mary’s title of Theotokos is not just one of honour; it is one of reality and substanceThe crucified and risen Christ is truly the King of Peace because in him God has utterly rejected violence as a way for humanity and for creation. It is the crucified and risen Christ who calls us to take a new path and find new solutions which do not bind us within fatal cycles of destruction and suffering. Christ calls us to a new vision of our own humanity and a willingness to step out beyond our own feeble powers to take his hand. He has brought peace between God and man, restored our broken and exploitative relation to creation; he has shown us that love is greater than hate and more creative in finding solutions.

In him we discover a common humanity and in the other, even our enemy, we see his face. That is why we can never despair of discovering him or erase his face with physical violence or the violence of lies and caricature. And when we see him, we find again the courage and the perseverance to say ‘no’, not this way, ‘never again’ – the ‘Nie Wieder’ that stands over all history.

Mary, the Mother of God, is Queen of Peace because she faithfully accompanies her Son on his way of peace; the way that all the logic of the world treats as folly. She does not escape her own suffering; she knows and accepts the cost of perseverance on the way of her Son. She cannot cease to be a mother. She cannot cease to be herself. She is the one, who from her own faith and faithfulness, brings forth the faith of his disciples and teaches them how to be ministers of the Gospel Peace of His Kingdom.  His gift of Peace which we receive each day at the Eucharist is already active in the world. In all the places of conflict, in all the maimed and the wounded, in all the communities disrupted by fear and violence, for all the mothers and fathers who grieve the loss of their sons and daughters, that gift of peace is not only a promise but a necessity.  In them we see again the face of Mary’s Son.

At the beginning of the year, Mary, Mother of God, Queen of Peace, teaches us again to say ‘yes’ to Him who is the source of Peace. She teaches us to work, to persevere, and to hope for this supreme gift, ‘for nothing is impossible to God.’

What shall we offer thee, O Christ,
Who for us has appeared on earth as a man?
Every creature made by thee offers thanks.
The angels offer thee a hymn;
The heavens a star;
The magi, gifts;
The shepherds, their wonder;
The earth, its cave;
The wilderness, the manger:
And we offer thee a Virgin Mother.
O God from everlasting, have mercy on us.