Jesus’ Baptism – Anointed with the Spirit 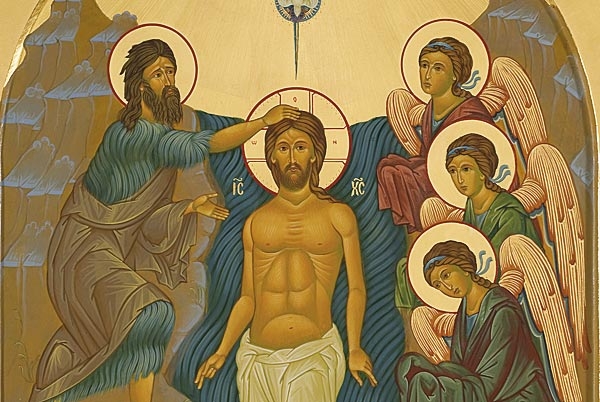 In the early Church, the baptism of Jesus was invested with immense significance. It was a moment of solemn anointing for Jesus, a moment of revelation of the Trinity and the inauguration of the public ministry of Jesus. However, some of the early heresies in the Church created confusion concerning the baptism by suggesting that it was only at that moment that Jesus became the son of God, adopted by the Father: the Arians used the baptism to try to prove that Jesus was inferior to the Father. As a result, concentration shifted from the baptism to the incarnation.

From the first moment of his earthly existence, Jesus was filled with the Holy Spirit. He was the Second Person of the Trinity, the Son, who took to himself a human nature in the womb of the virgin Mary. The baptism in the Jordan tended then to be seen not so much as a significant event for Jesus himself, but rather as an event significant for us. It made holy, once and for all, the waters of baptism.

What can we say about the effect on Jesus of his baptism and the anointing with the Holy Spirit? It is clear from the text of the Gospels that the events at the Jordan seemed to inaugurate a new phase in Jesus’ life. His life took on a new decisiveness and direction. He had a mission to accomplish; he selected disciples to accompany him and travelled according to a definite strategy.

When Jesus was anointed by the Spirit, he was consecrated and empowered to fulfill the roles of both the Messiah-King and the Suffering Servant.The evangelist Luke tells us clearly that after his baptism Jesus acted in the power of the Holy Spirit. Jesus was filled with the Spirit and was led by the Spirit into the wilderness to be tempted. It was in the power of the Spirit that he returned to Galilee to begin his preaching ministry. In Nazareth, Jesus went to the synagogue and stood up to read. Being offered the scroll of the prophet Isaiah, Jesus ‘found the place where it was written: The Spirit of the Lord is upon me, because he has anointed me to preach good news to the poor. He has sent me to proclaim release to the captives and recovering of sight to the blind, to set at liberty those who are oppressed, to proclaim the acceptable year of the Lord’ (Luke 4:1-19). He then shocked his listeners by announcing: ‘Today this scripture has been fulfilled in your hearing’ (Luke 4:21). His words were unequivocal. Jesus was testifying to what had happened to him. He deliberately found the Isaiah text because it spoke so clearly of what he had received. He had experienced an empowering of the Spirit and, furthermore, experienced the Spirit impelling him on his mission.

The anointing with the Holy Spirit confirms Jesus in the dual role of Messiah-King and Suffering Servant. These two concepts existed in the Old Testament in separate traditions, which emphasized very different elements of the salvation that God was going to bring about for his people. The image of the Messiah-King derived from King David. The Messiah to come would be one after David’s own heart, a king who would lead God’s people in victory over their enemies and would establish the rule of God in the land. The Suffering Servant, on the other hand, was a much more mysterious figure. Spoken of in the prophecies of Isaiah (especially the four Servant Songs in Isaiah 42:1-9; 49:1-9; 50:4-11; 52:13–53:12), the Servant was chosen and formed by God and filled with his Spirit. However, the Servant was to accomplish his work of bringing justice to the people through taking on suffering. In fact, his suffering was a taking upon himself of the guilt of sinners. By taking on their sin and interceding for them, the Servant of the Lord would bring salvation to all.

When Jesus was anointed by the Spirit, he was consecrated and empowered to fulfil the roles of both the Messiah-King and the Suffering Servant. The voice of the Father spoke in words that recalled Psalm 2 – a psalm which speaks of the Messiah-King – and also Isaiah 42 – the first Servant Song. The Father’s words seem to mingle together Psalm 2:7 –  ‘You are my son, today I have begotten you’ – and Isaiah 42:1 – ‘Behold my servant, whom I uphold, my chosen, in whom my soul delights; I have put my Spirit upon him, he will bring forth justice to the nations.’ For Jesus, the words of the Father and the coming of the Spirit would have been the clearest indication that he was to fulfil the role of the Suffering Servant. In the power of the Spirit, everything that happened in his life from now on revealed the characteristics of one who carried the sin and guilt of humankind. He forgave sins and healed infirmities, not only by divine authority, but also by the authority of the anointed Servant who carried our sins and infirmities.

It was not that this anointing as the Suffering Servant came as a surprise to Jesus. He had already prepared for it by coming to John the Baptist in the River Jordan. Those strange words, ‘Let it be so now; for thus it is fitting for us to fulfil all righteousness’ (Matthew 3:15), with which Jesus persuaded John to allow him to come for baptism, show that Jesus was already beginning to identify himself with sinful humanity. Jesus, by the power of the Spirit, took on himself human sinfulness so that he could ultimately destroy it. The destruction of sin was accomplished when he took it to the cross. It is not without significance that Jesus refers to his death on the cross at baptism. In a very real sense, what was begun by the Spirit at the baptism in the Jordan was completed in the power of the Spirit on Calvary. When Jesus gave his life as a ransom for many, it was as though the alabaster jar, containing the perfume of the Spirit, was shattered. That perfume could now spread throughout the house. It was from Calvary that the Spirit could now be released upon humankind. The barriers and obstacles to his abiding presence among us had finally been removed.

Once while Jesus and his disciples were on the road to Jerusalem, he was teaching them how he was to be handed over to death. Two of the disciples, James and John, approached Jesus with a request about places on his right and left. It is almost as though they had failed to hear what Jesus was saying. So Jesus reinforced what he was saying: ‘Are you able to drink the cup that I drink, or to be baptized with the baptism with which I am baptized?’ (Mark 10:38). For the disciples of Jesus, who are anointed with the same Spirit, it is necessary to drink the cup he drank, and to be baptized (or immersed) in his baptism (the cross). In fact, the Spirit will lead us deeply into the suffering and death of Jesus, because this is the place where sin is destroyed. It is also the place of the destruction of the old life in us. With that obstacle broken down, the fragrance of the Spirit can flow from our lives too. ■